Going to a “K” themed party and struggling to come up with a uniquely “K” themed costumes? I’ve got you covered.

Photo by The Ktchn

Right off the bat let’s get silly with it! Why not go to your first K party dressed like everyone’s favourite leafy green? The costume would be pretty easy because all you would need is deep green coloured clothes. You can even bring some kale to munch on and help people to make the connection easier. It’s lame, and silly, but why not?

Photo by Simple As That

The Hunger Games star herself is practically a K costume icon, so why not get yourself into cargo pants, boots and a jacket, throw your hair into a braid, place a Mockingjay pin on your lapel and carry around a bow and arrow with you? You can get fancier as you progress deeper into the movies to simulate Katniss’ other arena outfits, but nothing will have people pointing and saying “J-Law!” like the classic Katniss look.

The Queen of Pop has so many looks to choose from it is hard to narrow it down, but if you want to go for a quintessential Katy Perry look then you want to get yourself to Candyland pronto! If you are feeling bold enough, try on her California Gurls Daisy Duke cut off denim shorts and cupcake bra, or even opt for a more skin-covering but still colourful crazy candy dress. Whatever you do, add a bright and colourful wig and you’ll be jamming to Katy’s biggest hits in no time.

Fresh from the Kill Bill trilogy is Uma Thurman’s bride character in an iconic yellow and black jumpsuit, straight blonde hair and katana. Get yourself one of each and prepare for battle because everyone will be approaching you to tell you how much they love your outfit. But just who will you be able to trust?

This is a perfect costume idea for the guys out there looking to get a little more regal in their costumes. It’s also extremely versatile because the title of King can be subjective – just exactly what kind of King means that your costume is bound to be unique!

Go as King Kong and don a monkey suit and get double points for going as two K letters. Get yourself a staff with a heart on the end to rule your party as the King of Hearts (bonus points if your lady goes as the Queen). You could even go as King Arthur (from any one of the numerous King Arthur tales out there) and you could even get yourself an Elvis costume and go simply as the King himself. There are so many options here, so play around with it and have some fun! 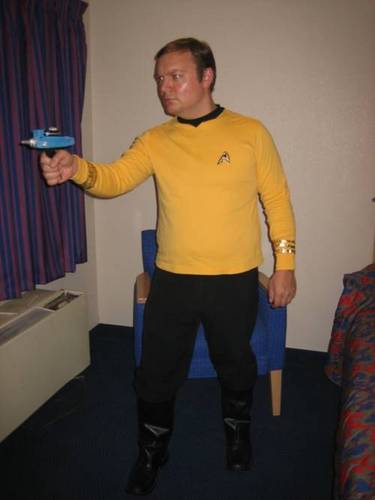 Photo via My Disguises

Captain James T. Kirk is one of the many famous characters in the Star Trek series, made famous by the epic William Shatner. The beauty of going as a Trekkie – and as one of the most famous Trekkies out there – is that the costume is simple enough to get. Black pants are a staple of any wardrobe for sure, and all you ned to do is buy a yellow Star Trek sweater from one of the many retailers out there. Easy and recognisable!

If you want something a bit more kick ass than Katy Perry, the band Kiss are throwing up a hell of an epic costume for you to wear. Think leather (or pleather) pants and shirts, spiked accessories and giant platform boots. The kicker for a Kiss costume? You have to choose one of your favourite Kiss bandmates and immolate their black and white face paints. You’ll certainly look awesome and be ready to rock the night away!

Wherever a king is sure to go a knight will be sure to follow. Whether you go as a Knight of the Round Table, or a Knight from the TV show Game of Thrones, all you need to do is get some metal armour, chainmail and put a sword in your sheath and you will be ready to go.

I hope some of these ideas help you if you are struggling to come up with a costume for a K themed party. If you go as any of these other kooky characters, or if you have any ideas of your own, I would love to hear about it and see photos in the comments section below. Until then, hold out for our next Alphabet Files costume list for costumes that start with the letter L.