In the name of entertaining, I’ve become quite a Board Game nut. I love nothing more than sitting round a table with my friends, consuming too much red wine, and playing board games well into the night. Add in a few slices of pizza, and this has become a typical Saturday night routine for me, which is where July’s “5 ways to use” comes in. It’s time to honor those Saturday night routines and up the ante to encompass all of your celebrating needs! 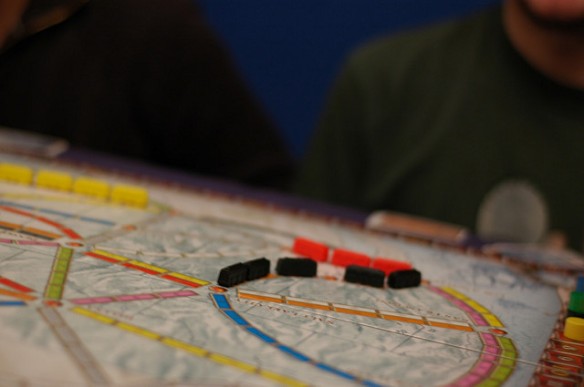 Host a Board Game Night!

Want a casual and relaxed way to have your friends over? Then host a board game night! Set up as many board games (or leave them out for your guests to choose which game they want to play) on any clear spaces you possibly can. Make sure some canapes or entertaining pieces are somewhere close, and get playing. Players can rotate or start their own games, or simply chill with those who are playing. Anything can happen!

Use Board Games as a Centerpiece

I’ve seen this idea used at a wedding, and it was rad! Set your wedding table signs up as the “Hungry Hungry Hippo” table, or the “Monopoly” table, or the “Uno” table, instead of regular numbers. Guests can then use these games as fun ice breakers or a way to rid themselves of boredom.

Going to a costume party? Why not think outside the box and go as your favourite board game character, instead of a movie or TV show character? The best example of this kind of costume would be from the “Cluedo” gang – you can dress up in classic Colonel Mustard, Lady Peacock or Miss Scarlet garb. Maybe the King Pin of Monopoly is more your style, but either way pick a character and a game you love and run with it!

These murder parties are extremely popular, and I’ve been to no less than three! The idea is similar to “Cluedo” in which guests are given characters they play at the party, and one guest “dies” under mysterious circumstances. The rest of the guests have to then follow the clues and find out who did the deed. It’s super fun, and a great way to make your favourite board games even more interactive.

Eat the Board Game Pieces

When playing board games with smaller children, you tend to find most pieces ended up getting swallowed, so why not utilise this childhood trait and eat your board game pieces? I’m not talking about actual dice and chess pieces, I’m talking about edible versions! Make a domino or Rubix cube shaped cake, or fondant covered cookies in the shape of playing cards. Anything can go, and the more classic you go, the better!