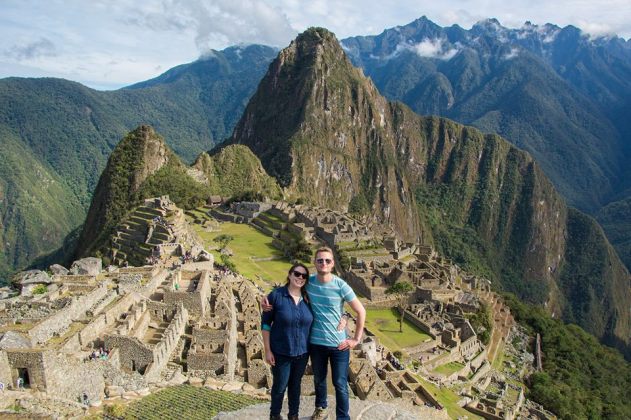 My husband and I recently went to Peru and were amazed by how wonderful this country was! Everyone was so hospitable, and we had such a wonderful time getting immersed in the culture of this South American country. We spent four days hiking the Inca Trail (definitely one of the most beautiful, and hardest things I have ever done!); travelled to the start of the Amazon Jungle where I had one of the most beautiful experiences of my life when we floated down a river in the middle of the Amazon on a small tin boat and watched the trees everywhere burst with life from a large family of spider monkeys; and visited the beautiful and innocent world of the floating islands of Lake Titicaca.

We were lucky that for our entire holiday we had a wonderful guide by the name of Wilson help us out all the way (seriously, he probably saved my husband’s life – and managed to get him a cake on his birthday!) and he opened up to us one night in Puno about what his wedding was like. You guessed it – it’s time for another International Wedding Custom, thanks to the wonderful Wilson!

Two Days of Celebration, But One Day Spent Apart

The bride wore white, and the groom wore navy blue (but only because it was cheaper!). The wedding took place over two days in the groom’s hometown. We were informed that on the first day, the bride and the groom were not allowed to drink any alcohol and could only drink juice for the first celebratory day, as well as the fact they weren’t allowed to smile at each other or really communicate to each other at all. The Food and Drink

You have probably heard by now that Peruvians have popularised the (shock, horror!) dish of eating whole roasted guinea pigs – but rest assured that these little critters are not eaten every day and are reserved for celebrations like birthdays and weddings (and for tourist consumption – by the way, guinea pig doesn’t taste very nice!) and even kept as pets! However, for the wedding of our wise eight ball Wilson, he did divulge that guests indulged in a  guinea pig or two.

There were several different dishes and drinks on offer, including the popular Peruvian drink Pisco, which many mistake as a form of agave or tequila, but is actually made from grapes and therefor closer in relation to wine than tequila. The Pisco is generally mixed with lemon, sugar and egg whites in a big ceramic pot with the bride and groom’s names painted on it, which was given to them as a gift from one of the guests.

Some other gifts given at the wedding were the similar gifts you get at traditional weddings back west, including blankets, plates, cups and crockery.

Our wonderful tour guide Wilson also told us about the ceremony that was involved in the wedding. Besides the traditional “Do you man take this woman to be your wife?” the ceremony involved a ritual dedicated to Pacamama, who is the Earth Goddess or Mother Earth that the Peruvians believe in. Part of the ceremony is to bury small doll versions of the bride and groom in the Earth, wrapped in cocoa leaves and planted with a seed. This ceremony symbolises good luck for the bride and the groom, and the planting of the seed means that a tree – like the love of the bride and groom – will continue to grow.

There is also a ceremonial ritual which is utilised in every day life of the Peruvians, in which it is customary to pour a drink out for Pacamama before you take your own sip, in dedicated to the Earth goddess. This every day custom is a fun thing to do to honour Mother Nature before drinking, and is done several times at the wedding as well. 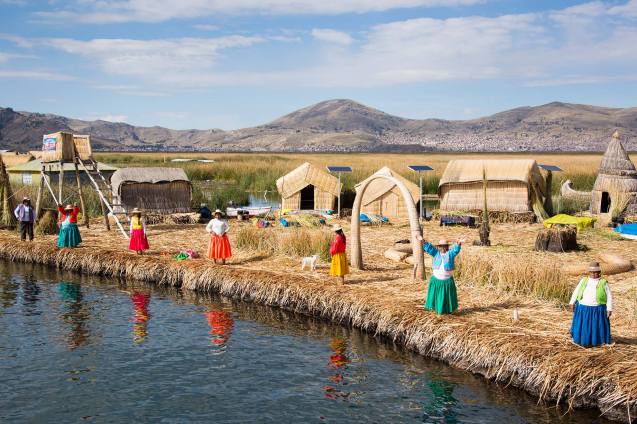 Before I leave you to ponder about whether you want to incorporate Peruvian weddings customs into your own wedding, I learnt a thing or two about wedding customs on the island of Lake Titicaca in Peru as well. The customs on this island is very different to that on the mainland – groups of families not only make their own island out of reeves to live on (it’s amazing being on these little islands!) and are extremely self-sufficient. The men are amazing knitters and from the ages of around fourteen, they knit their own ceremonial caps to dictate their singleness or married. On their wedding day, the grooms wear white and red caps that they make themselves, and then during the wedding ceremony they swap to their special married red caps.

The brides on the other hand tend to wear big black skirts with heaps of colourful skirts underlaying the black one. The women can sometimes wear up to 15 – 18 colourful skirts, and the bigger the skirt the more well-off and better the husband – that’s right, the men MAKE the skirts for the wives! So you guys out there better get cracking! But it’s not all easy work – the brides make their husbands special bags with intricate designs on them for them to carry their cocoa leaves in.

The wedding ceremony itself from Lake Titicaca is a mix of these traditional Peruvian customs, as well as the Catholic traditions that were brought in from the Spanish during their “discovery” of South America, and was such an interesting and captivating custom to see that I highly recommend incorporating a bit of Peru into your own wedding planning, even if it’s making your partner a special gift for the wedding. What a lovely idea!

I hope you enjoyed going on just this little snippet of a journey into the country of Peru with me, and I hope you look forward to my next International Wedding Inspiration post, in which we explore the marital journeys of Bolivia! Until then!

One thought on “Peruvian Wedding Customs”