When I was younger I used to attend a weekly youth group at my church, where we would partake in a whole series of different and fun activities that brought us all together. These Friday nights were some of the best during my pre-adolescence simply because we had a huge variety of creative things to do – everything from jelly wrestling and shaving cream pie-throwing at Messy Games nights, to movie nights that overflowed with Malteasers and bean bags. These wonderful nights were organised in part by Jayne Barton and Gary Overett, who eventually got married (Jayne becoming Jayne Barton Overett), had four beautiful children together (Can you say destiny?) and have since turned into perfect, fun and creative children’s parties that leave everyone amazed and delighted! These parties are just so good, that I simply had to share them with you!

The first party I want to shed some mood lighting on is this amazingly creative and unique Neon Anglerfish party that was thrown for Jayne and Gary’s son Elijah, who apparently has an ongoing fascination with this creepy creature of the deep thanks to their spectacular ability to glow. Jayne decided to focus heavily on the glowing aspect and attacked Pinterest and other online DIY tutorials for some excellent ideas. 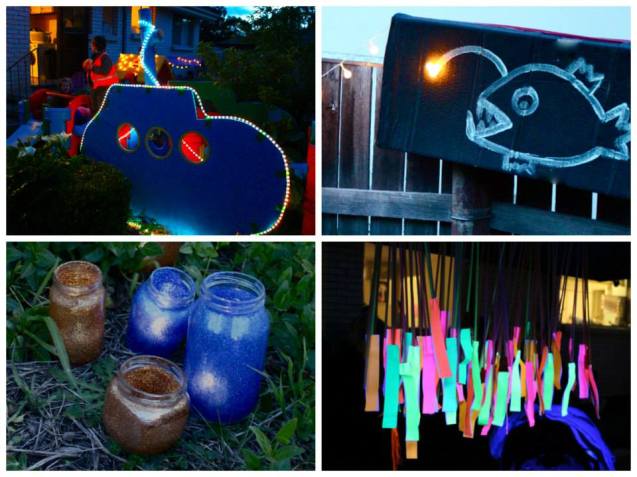 To keep with the underwater theme, a submarine was constructed out of two pieces of wood that were cut into shape and joined together by two single bed heads with a play gym in the middle (how amazing is that?) Apparently this deep sea submarine used for the party has been turned into this wonderful decorative element after being cut down from a garbage truck, fire truck, tow truck and then the original submarine! Now it bears neon Christmas lights to send your little explorers to the depths of the sea – amazing!

The main decorations were basicially anything that could glow under black light, which were commandeered for the party. Lining  the garage with black sheets, Jayne painted a huge Anglerfish with glow paint and glued Happy Birthday letters out of fluorescent paper, as well as a glow stick station, where guests could get their own lights. At the entrance to the garage, straws had been cut to various length with fluorescent paper attached to the straw to create an amazing glowing curtain for added decoration! 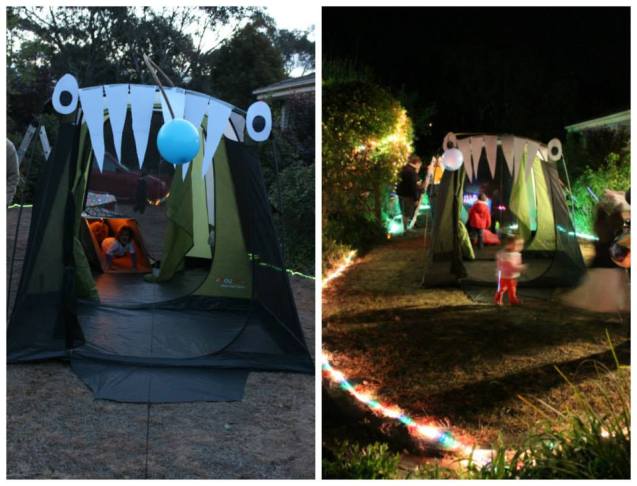 When putting the party together, a camping tent become a giant Anglerfish itself by using a light up balloon as the light of the Anglerfish descending into the garden bed depths. Teeth and eyes were cut out and attached to the entrance of the tent to create the Anglerfish, and the kids went nuts crawling through the Anglerfish tent, as well as some dark tunnels that had been created from cardboard with Christmas fairy lights poking through small holes at the top.

After the kids had fun crawling through the tunnels and having a play, they also had turns hitting a fluorescent Anglerfish piñata that Jayne has converted from a colourful fish piñata and added fluorescent paper and paint. The kids all wore fluorescent, white or black clothing that moved with the black light and made them feel like part of the decorations. Elijah was even treated to a beautiful black sweather that had an Anglerfish painted on the front, and had a battery operated light pushed through the material. What an amazing idea!

Of course, at a Neon Anglerfish party you have to come to face that the food will have to glow! The food that was served included glowing jelly, which glowed under the black light because it was made from tonic water, as well as Fairy Floss that had been spun  onto glow sticks (genius!) as well as mini flurescent bottles of sherbert. The Anglerfish birthday cake itself glowed thanks to the icing being made with tonic water, as well as having a sparkler on it’s head to act as its light. There was also Anglerfish cookies with a bent lollipop strick coming out of it’s head to give it an Anglerfish feel.

Next came the amazing party favours. Jayne made each of the kids their own Anglerfish puppet to take home with them and managed to snap up a whole series of oven mitts at a sale, as well as golf tees to be used as teeth (Honestly – It was like it was meant to be!). Jayne then ordered finger lights and poked wire through to top of the mitt to have the light attached to make the classic Anglerfish light bulb. She used silicone sealant (thanks to Gary!) to stick them all together and they were an absolute huge hit at the party!

Jayne did an absolutely wonderful job at putting this party together, and you can tell by all of the children’s faces that it was one of the most memorable and unique parties that they have ever been to – and probably ever will! Stay tuned to the blog, because I will be featuring some more parties designed by Jayne Barton Overett for her lovely family in the next coming months.