This Easter, we decided to try something new. Byron’s little sister Kaela was starring in her own float with a  parade to match for the yearly  “Blessing of the Fleet” festivities, which is kind of like a traditional beauty pageant/ball rolled into one that ends with a big parade down main street of his hometown on Easter Sunday. We agreed to be “extras” for this parade and before we knew it we were ready to walk the main street.

Floats are fun things – themed and decorated, they can be absolutely outstanding and “The Blessing of the Fleet” is a huge event every year, so all of the float decorations and themes can be easily transferred into smaller parties or celebrations. Heaps of different floats graced the streets, with Alice in Wonderland, Disney Villains, and Willy Wonka and the Chocolate Factory themes amongst them. At our urging, it was agreed that Kaela’s float would be Fire and Ice themed – a party I’ve always wanted to throw!

Fire and Ice is a great theme for a celebration, party or float. The stark contrast between the two worlds of hot and cold spark the imagination and create infinite possibilities to stand out. Byron’s mother made an excellent world to sit upon the back of a hire truck using different coloured material to mark between the fire and the snow, as well as decorations such as cardboard cutout fire, garlands of fake snow and snowflakes and a variety of tinsel and decorations you can find in your own backyard.  Here are a few things that really took the cake:

Byron’s mother created a wonderful element to add to the frozen part of the float – an Ice Maiden frozen solid in a bubble bath. Made of styrofoam and paper mache, the ice maiden had glittering blue frozen lips and fake eyelashes, and sat amongst glittering snow bubbles that had frozen over.

On the other end of the scale, in the heated section, was a paper mache volcano that spewed plumes of smoke from a smoke machine – something that I had a wonderful time controlling while sitting on the float.

As part of the float, which was separated into the two segments of fire and ice by split coloured material, was the placement of two trees – one burnt and one frozen over. Both trees were cemented on a round tray, stripped of their leaves and painted to look their appropriate style.

The burnt tree was painted jet black, and had red chillies hanging off the bare branches to show their heat. They had cardboard flames licking the edges and sitting together. The effect of the chillies were a perfect addition, despite its less than natural nature. 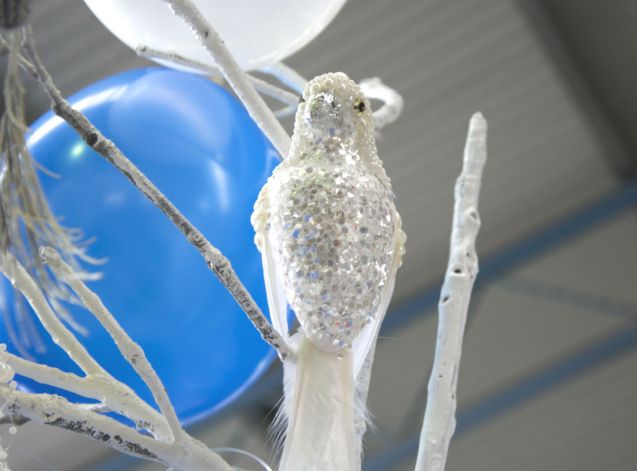 The frozen tree was painted a stark contrast of pure white and was glittered with little snowball jewels to create a snowing effect. A few snow white trees that were bedazzled as well sat amongst the dead frozen branches to give it a few more interesting additions. White and blue balloons were tied to the trees to add a few more icy elements to the stark tree.

If you’re looking to throw a fire and ice themed party, then you definitely need people to dress up! Kaela grabbed her closest friends and family to be apart of the float and everyone dressed up to go along with the theme, which was a great way for everyone close to Kaela to show their support and have fun, while putting her at ease (standing on a float in front of everyone can be pretty nerve wracking!). There were costumes aplenty, with several Ice Queens and Ice Maidens, fiery devils and even body morph suits accompanying the float. My husband dressed up as a snow yeti and I was a fire demon just for the occasion. I have to say – it was pretty damn fun, and it felt so great to be able to support Kaela with her float and pageantry. Love you K-Dawg!