If you have any kind of foot in popular culture, you will know that the cute Cartoon Network cartoon Adventure Time is super big right now. Based around a 13 year old human boy named Finn and his best friend, talking stretchy yellow dog Jake, Finn and Jake go on all sorts of heroic adventures, helping out various colourful characters throughout their magical lands.

Some adventures take them on a dark and twisting turn, such as getting the Peppermint Butler to let them into Hell, while others are as light hearted as helping the Duke of Nuts with his pudding deficiency. None the less, the adventures are so fun and colourful, they make for a great theme for a party!

If your child (or adult Adventurer) wants to have an Adventure Time themed party, there are some great ways to go about doing that. Here are some super fun ways I have discovered over the internet: 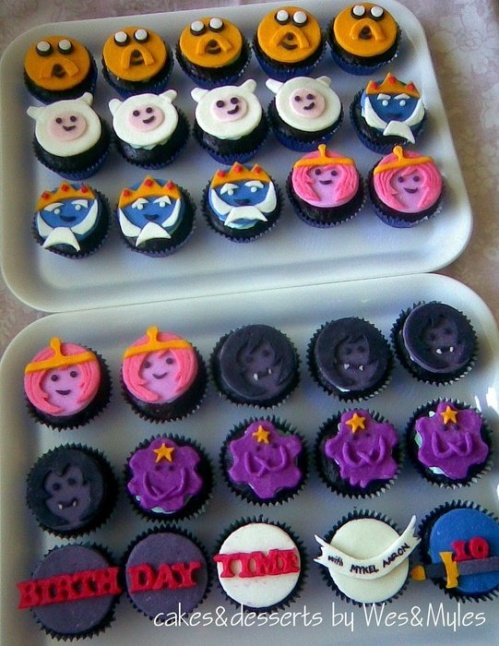 Photo by Tina at Cakes Decor

First up is the food. There are a variety of different ways you can go about eating your adventures. The more basic idea is to use cupcakes as your artistic canvas. Use different coloured fondants to create the faces of the different Adventure Time characters and stick them all together.

Use a yellow round circle fondant and black and white eyes to create Jake. Use a smaller tan circle in the middle of a larger white on to create Finn and his little ear hat. Do the same sort of style for all your other favourite characters, not forgetting Marceline the Vampire, Lumpy Space Princess and Princess Bubblegum. There are so many different characters you can create using fondant!

Along the same lines is to create cake pops and use different coloured icing to form the image and body of the different characters. You can set them up like the photo did above in ice cream sundae waffle cups that go along with the same main colour of the character. You can also get cute Adventure Time 3D cutouts to decorate the table with as well. My fiancee made me a Peppermint Butler one to sit on my computer! 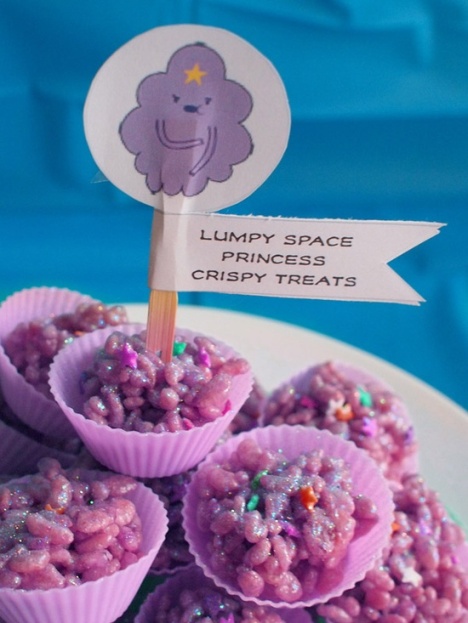 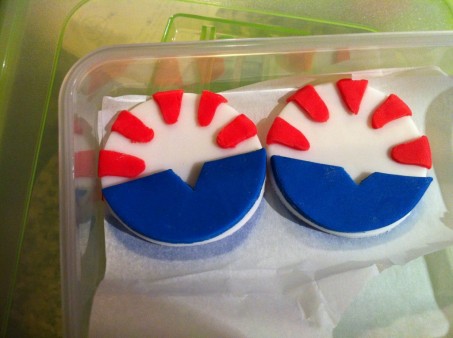 You could also make Peppermint Butler cookies using icing and fondant! If you want, you could even put a bit of peppermint flavoured essence into the dough to give it an authentic taste!

To quench the thirst your little adventurers would have worked up, you can serve a Marceline style vampire drink! Use blood oranges and lemonade to make a refreshing drink that holds up to an Adventure Time vampire!

Once you’ve had your fill it is on to the fun and games! Decorate each room in your house (an Adventure time house party is best as opposed to having it in an actual venue of a club or function room) to be the different lands in the Adventure Time kingdom.

Decorate your kitchen full of candy style to be the Candy Kingdom. Put giant lollipops on sticks to guard the doors and put powder puff everywhere! You can put all your Adventure Time refreshments in here to add to the delicious flavour of the Candy Kingdom!

Next decorate each room. You can make the lounge Marceline’s cave by giving it an eerie vampire make over, and make the dining room Treetrunk’s home by putting lots of homely touches and apples to the room. Go nuts! Watch a whole bunch of Adventure Time and see what lands they get up to, to give it a more authentic feel.

Have a bedroom as the Ice Palace by putting white sheets on the floors and ice blue sheets suspended from the walls. Next, have a designated person dress up as the Ice King and “kidnap” another designated person dressed up as a princess (any princess is fine – the Ice King loves Princesses of all kinds!) and get the birthday boy (or girl – remember Finn was Fiona at one point!) to dress up as Finn and lead the other party goers on a trip through different lands (ie. different rooms) to try and rescue the princess. 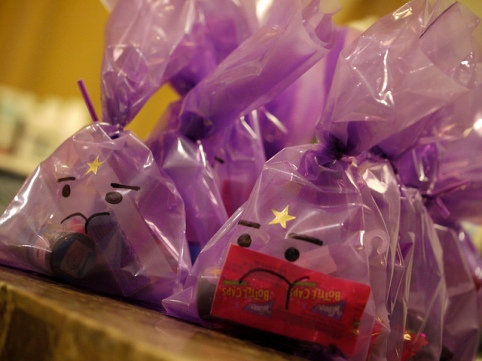 Once the princess has been saved you can all enjoy the rest of the party! For people who have to leave, I love the idea of giving them a goody bag to go (maybe full of fun items like water bombs or a water pistol, collector cards, Adventure Time toys you can get from Toys R Us, that kind of thing) but put it in a purple bag in the shape of Lumpy Space Princess. It’s a fun idea to take home!

Don’t forget that if you have this party, you should make everyone dress up! There are so many different characters in this world so that even if the main characters of Finn and Jake and Bubblegum are taken, you can still have guests dress up as smaller roles, such as Cinnamon Bun, The Peppermint Butler, Treetrunks, The Breakfast Princess, Ghost Princess, The Duke of Nuts, The Party Teddy, Bemo, A Cupcake, The Duke of Nuts, Rainacorn, Monocromacorn, The Flame Princess, Gunter and the list goes on… All the chararacters can do a gender swap too, so don’t be afraid to be a Flame Prince instead of a Flame Princess!

I bags being the Peppermint Butler!