The Queen of Hearts is one of the most prominent characters in the Alice in Wonderland tale, and something about being  a decadent and crazy queen who wears a lot of red has everybody wanting to yell “off with her head!” So why not let them, by having a Queen of Hearts style party? Here are some ways to do just that…

The Queen of Hearts wears a lot of black and red, and would much prefer everything to also be red (“We’re painting the roses red!”) so you should use this colour scheme when decorating your party. The point of the Queen is that she is the ruler of her deck of cards and a deck is usually black, white and red so incorporate this into the design. You can decorate your tables with black tablecloths and beautiful red sashes to go on the back of chairs. Use white and black place settings and plain white plates to incorporate the white  and mix up the bold colours of black and red.

My favourite piece from the above photo is definitely the centerpieces. Yvonne used oversized red queen chess pieces as the main feature on the table and put vases of red roses with a stem and hedge piece intermittently between them. It’s a pure Queen decoration and would look great around the party, and not just as a centerpiece. Use spiral hedges to guard the entrances of doors, and put vases of roses on available tables. Red roses would be the best – we all know how the Queen hates white!

Giant chess pieces are also necessary for any Queen of Hearts party and if you can, land yourself a giant chess game that would make for a great decoration piece as well as entertainment for your guests. The Queen was infamously a fan of croquet so if you can get a colourful croquet set for the party it will also be a great addition to the theme! 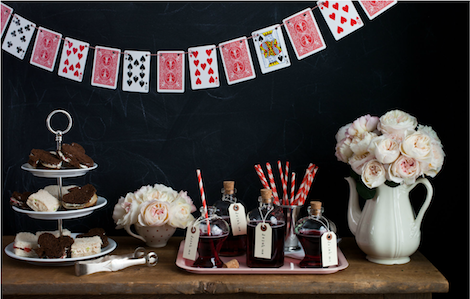 A cute idea is to create a garland out of an old deck of cards you might have lying around. It would look really sweet and very Queeny hanging above your dessert table. Failing that, if you don’t have a deck of cards around, you can hang up general red, black and white flag bunting to give it that same feel.

These awesome photos above are also an amazing way to decorate your tables that also incorporated general items from the Alice in Wonderland story – not just the Queen of Hearts. Spread a deck of cards over the table around the place settings and add in a few bits and pieces like small bottles that have “Drink Me” labels on them and the White Rabbit’s pocket watch.

T Time Chic also served some fun foods that are fit for a queen’s court. Serve tea and champagne (specifically red and pink colours) as well as black and white tea sandwiches that are cut out in the deck’s shapes (diamond, club, spade and of course hearts!) and other items such as red velvet cupcakes, strawberries and other berries and deck shaped cookies. You can go crazy with the ideas here! 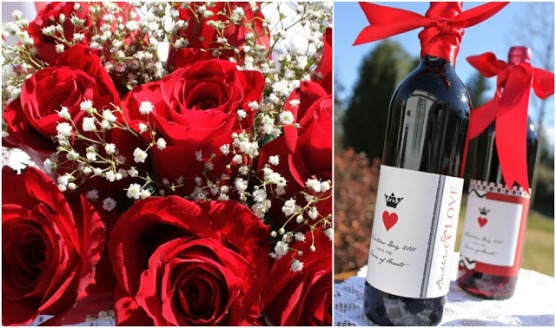 Photos by Chris Nease from Celebrations at Home

You can also stick to the red theme and serve red wine for your guests. You can even design your own labels for the wine bottles that feature a Queen of Hearts or a deck of cards design like they did at Geminye Concierge.

No matter what you do, make sure you capture the decadent and excessive insanity that is the Queen of Hearts. Games, Decks of Cards, Red Roses and the colour theme of black, red and white are key in this  theme so don’t forget to utilize all of these elements! if you get around to having your own Queen of Hearts party, let me know. E-mail me at thepartyconnection@hotmail.com

One thought on “Queen Of Hearts Party”