For some strange reason, the idea of an old school wizard in blue robes and a pointy hat with silver stars all over it, with a long bushy beard and a magic wand makes me super happy. I don’t know what it is, but the idea of the original wizard is a fun and magical thought. So I got super happy when I discovered this amazing Modern Magic inspired Birthday party  because the ideas just started rolling. Check out this cute party! 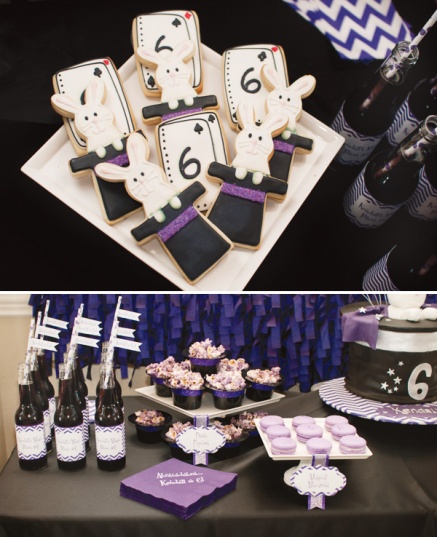 The food is an important element of any party and a magic theme is so specific it might be hard to find foods that would fit into the theme. Eventology Weddings decided to arrange a variety of normal dessert foods and put the themed twist on them by serving them with magic images. Serving smaller and messier items such as popcorn or jelly beans in a mini top hat is also an amazing idea on how to present the food nicely while still going along with the magic theme. A birthday cake that features a giant rabbit jumping out of the top of a cake is a special touch.

Cookies  and cupcakes are a normal treat for a party, so why not ice them and cut them into shapes associated with the party, like white rabbits, hats and playing cards? Instant magic! 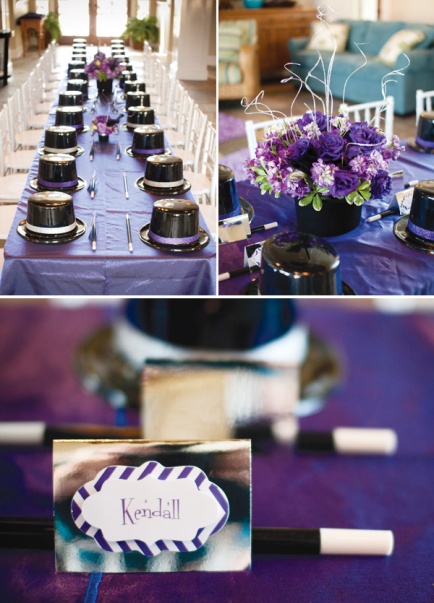 Decorations and favors are also a great and fun way to have guests really remember the party and what a great time they had! The centerpieces were upside down top hats with purple flowers in them!

Working their own magic, Eventology Weddings had the placecards set at the table and each setting had their own top hat and magician’s wand to play with and take home from the party. She also added a little favor bag that had items such as “magic ink”, silly string and a magic coin trick for the kids to take with them. A great way to have the kids take the magic home with them!

One thought on “Birthday Party Magic!”